On December 9, Defense Miniter Kishi held a VTC with Minister Anand, National Defence of Canada. They exchanged views on bilateral defense cooperation and regional security issues, and affirmed their continued close cooperation to uphold and reinforce the Free and Open Indo Pacific.
They exchanged views on the East and South China Sea and expressed their will to strongly oppose any attempts to unilaterally change the status quo by coercion, and concurred in sending a clear message that a free and open maritime order based on the rule of law is important.
In addition, both ministers reaffirmed their commitment to closely coordinating toward the complete, verifiable, and irreversible dismantlement of all of North Korea’s weapons of mass destruction and ballistic missile of all ranges. 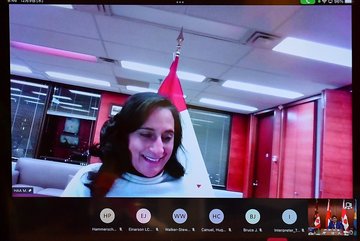