On June 16, 2021, Minister of Defense KISHI attended the 8th ADMM-Plus via a videoconference. A brief summary of the meeting is as below.

(1) The 8th ADMM-Plus was held via a videoconference with Minister-level participation from the 10 ASEAN Member States and 8 Plus countries. At the meeting, views were exchanged among Minister-level participants on the regional and international security landscape. On this occasion, the Ministers adopted the “BANDAR SERI BEGAWAN Declaration by the ADMM-Plus in Commemoration of the 15th Anniversary of the ADMM on Promoting a Future-Ready, Peaceful and Prosperous ASEAN.”

(2) Minister Kishi noted that the global crisis caused by COVID-19 is driving momentum towards multilateralism. He expressed his resolve to take a leading role to address global challenges, such as climate change, cyber security, disaster response, and concrete cooperation in infectious disease control.

(3) Minister Kishi further stated that practical defense cooperation under the ADMM-Plus framework and Japan-ASEAN defense cooperation have both made steady progress. In particular, he expressed Japan’s commitment to lead multilateral defense cooperation in the field of Peacekeeping Operations (PKO) under the ADMM-Plus framework as a co-chair with Vietnam of the Experts’ Working Group (EWG) on PKO. In addition, he mentioned that in April, Japan virtually hosted the“Japan ASEAN Seminar on HA/DR (Humanitarian Assistance and Disaster Relief)” under the “Vientiane Vision 2.0”, the guiding principle for Japan’s defense cooperation with ASEAN. He added that Japan shared knowledge about infectious disease control with ASEAN Member States and led a meaningful and timely discussion at the seminar.

(4) Minister Kishi noted that Japan has consistently been advocating for “the rule of law” in the seas which are indispensable for our prosperity. He pointed out that there are continued attempts to change the status quo by coercion in the East China Sea and the South China Sea. He urged that it is important for all parties concerned in the South China Sea to make efforts toward the peaceful resolution of disputes in accordance with international law, in particular the U.N. Convention on the Law of the Sea (UNCLOS). Moreover, he underscored that the China’s Coast Guard Law, which entered into force in February this year, should never undermine the legitimate interests of relevant countries. He also stated that peace and stability across the Taiwan Strait is important for the international community, and expressed his expectation that the issues pertaining to Taiwan will be resolved peacefully by direct dialogue between the concerned parties.

(5) Then, Minister Kishi underlined the importance of full implementation of U.N. Security Council resolutions in order to achieve the complete, verifiable, and irreversible dismantlement (CVID) of all of North Korea’s weapons of mass destruction and ballistic missiles of all ranges. Regarding the situation in Myanmar, he urged the Myanmar military to immediately stop resorting to violence against civilians, release those who are detained, and swiftly restore Myanmar’s democratic political system, and then welcomed ASEAN’s initiatives for resolving the issue.

(6) As like-minded countries are showing their support for ASEAN unity and centrality, and enhancing their activities and engagement more than ever before to ensure peace and stability in the Indo-Pacific region, Minister Kishi expressed his intention to closely collaborate with such partners under Japan’s “Free and Open Indo-Pacific (FOIP)” vision. He also highlighted his full support for the “ASEAN Outlook on the Indo-Pacific (AOIP)” announced by ASEAN. Lastly, he expressed his determination to contribute to practical defense cooperation under the ADMM-Plus framework in the future amid further rise of multilateralism prompted by COVID-19. 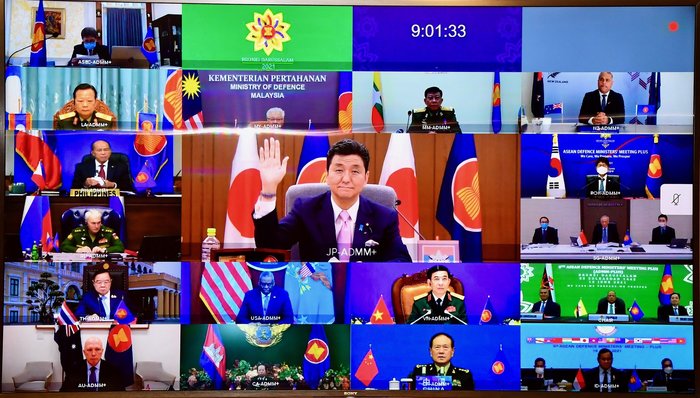