On March 28, DM Kishi held a face-to-face meeting for the first time with DM Prabowo of Indonesia. They exchanged views on regional security issues and defense cooperation, and confirmed to further strengthen the bilateral relationship.

During the meeting, DM Kishi and DM Prabowo agreed to hold Military to Military dialogue, continue consultations on defense equipment and technology cooperation and further promote service to service cooperation, and welcomed to hold the “2+2” meeting on 30th this month for the first time in these 5 years.

On March 28, 2021, Minister KISHI held a meeting with Minister of Defence of the Republic of Indonesia, H.E. Lt. Gen. (ret.) Prabowo Subianto.

2 The two ministers exchanged views on current regional security issues. Minister Kishi underscored the requirement to uphold and reinforce the ”Free and Open Indo-Pacific (FOIP)” based on the rule of law and noted serious concerns about China’s Coast Guard Law, which entered into force on February 1st. The two ministers confirmed the importance of freedom of overflight and navigation, reaffirmed the need for observing international law, including the United Nations Convention on the Law of the Sea (UNCLOS). Minister Prabowo expressed his views of using diplomacy and dialogue in resolving disputes between countries, and uphold of the rule of law in dealing any disputes. Ministers Kishi and Prabowo also discussed the situation in Myanmar and noted their deep concerns over the current situation. The two ministers affirmed their intent to cooperate closely on this matter.

Furthermore, they affirmed the importance of continuing and strengthening bilateral defense cooperation
and exchangesin order to contribute to “ASEAN Outlook on Indo-Pacific” issued byASEAN in June 2019
and Japan’s “Free and Open Indo-Pacific (FOIP)”, which share substantial elements with each other. They
also concurred that they will accelerate consultations at the working level, including MM Dialogue.

4 The two ministers also concurred on the need to proactively promote defense cooperation, while
maintaining close communication between respective defense authorities, even in view of the impact of
COVID-19. 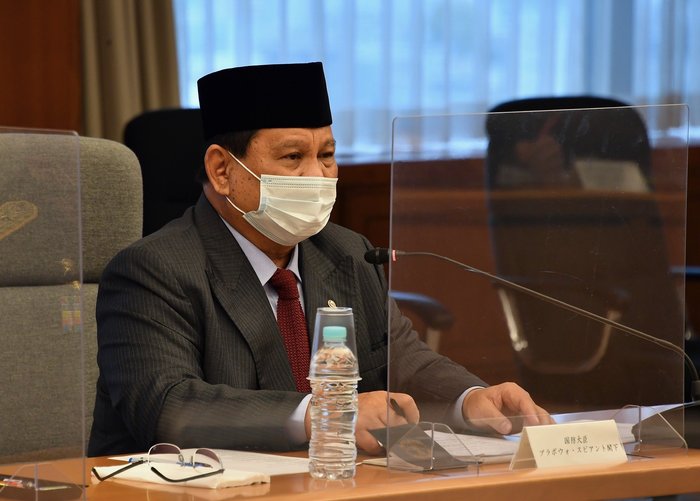