3  On multilateral defense cooperation, Minister Kishi congratulated Vietnam’s achievements as the Chair of ASEAN for 2020. The two Ministers welcomed the successful hosting of the Experts’ Working Group on PKO under the framework of ADMM-Plus, which was held on April 6 for the first time under the Japan-Vietnam co-chairmanship for the cycle of 2021-2024, and recognized that bilateral defense cooperation has contributed to practical cooperation in the multilateral frameworks. The two Ministers also welcomed that the both countries were able to share lessons learned in the context of preventing the spread of infectious diseases through “Japan-ASEAN HA/DR Online Seminar,” which was held in April, 2021 as a series of defense cooperation in the area of counter measures against infectious diseases.

4  The two Ministers exchanged views on regional security issues, including the East China Sea and the South China Sea in light of the current events occurring in the region. They reconfirmed the importance of freedom of navigation and overflight, and reaffirmed the critical need for observing international law, including the United Nations Convention on the Law of the Sea (UNCLOS).

Minister Kishi expressed his view that it is important to uphold and reinforce a “Free and Open Indo-Pacific (FOIP),” and stated his intent to reinforce within the international community a steadfast opposition to any unilateral attempts to change the status quo by coercion. From these perspectives, Minister Kishi expressed serious concerns over the China’s Coast Guard Law.

Regarding the situation in Myanmar, Minister Kishi welcomed the outcome of ASEAN Leaders’ Meeting, and the two Ministers affirmed their intent to continue to cooperate closely within the framework of ASEAN on this matter.

5  The two Ministers concurred in proactively promoting defense cooperation and exchanges, while maintaining close communication between their respective defense authorities.

6  The two Ministers have affirmed the need for holding a face-to-face meeting at the earliest possible opportunity. 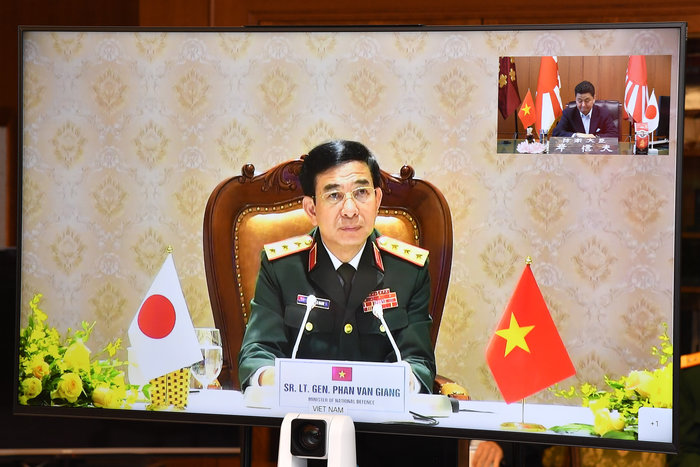