On March 30, DM Kishi and FM Motegi held in-person 2nd Japan-Indonesia 2+2 meeting with DM Prabowo and FM Retno of Indonesia. Japan-Indonesia 2+2 was held for the first time in this 5 years.
The four ministers renewed their commitment to further promoting cooperation based on the “strategic partnership” between Japan and Indonesia, both maritime nations and share fundamental values of freedom, democracy and the rule of law.

On March 30, 2021, Mr. KISHI Nobuo, Minister of Defense of Japan and Mr. MOTEGI Toshimitsu,Minister for Foreign Affairs of Japan held the second Japan-Indonesia Foreign and Defense Ministerial Meeting (“2+2”) with H.E. Lt. Gen. (ret.) Prabowo Subianto, Minister of Defence of the Republic of Indonesia and H.E. Ms. Retno Lestari Priansari Marsudi, Minister of Foreign Affairs during their visit to Japan. The meeting was held from 5:20 p.m. for approximately 100 minutes. The summary is as below:

Both Japan and Indonesia welcomed to hold Japan-Indonesia Foreign and Defense Ministerial Meeting, which is the only “2+2” framework in the Southeast Asia, for the first time in these 5 years. They confirmed to exchange views mainly on bilateral cooperation including security policies and defense cooperation, as maritime countries and the strategic partners sharing fundamental values. Minister Kishi stated that it is important to closely coordinate between Japan and Indonesia amid the current severe security environment.

2. Security Policies of Japan and Indonesia

The Japanese side explained that Japan is promoting initiatives under the concept of “Free and Open Indo-Pacific (FOIP)” mainly based on the following points; (1) dissemination and establishment of fundamental orders in the international community such as the rule of law, free trade and human rights; (2) economic prosperity through strengthening connectivity and; (3) efforts towards peace and stability, including maritime security. Minister Kishi expressed his intention to further deepen bilateral defense cooperation in order to realize FOIP and “ASEAN Outlook on Indo-Pacific (AOIP)”, which share many substantial elements with each other. In response, the Indonesian side stated that Indonesia would like to further strengthen the relationship with Japan.

The both sides exchanged views on bilateral cooperation, especially in the defense cooperation including defense equipment and technology cooperation. They welcomed the signing of the Agreement Concerning the Transfer of Defense Equipment and Technology, which was affirmed to start its negotiation at the first Japan-Indonesia Foreign and Defense Ministerial Meeting in 2015. The Japanese side stated that the Agreement is expected to lead to transfer of specific defense equipment. Minister Kishi also expressed his intention to further promote the relationship with Indonesia in order to uphold and strengthen free and open maritime order through proactive participation in multilateral exercise “Komodo”, which is hosted by Indonesia, and other bilateral exercises taking the opportunity of port visit by vessels and the Indonesian side welcomed this proposal. The both side also agreed to realize a visit by the Commander of the Indonesian National Armed Forces to Japan, and hold a Military-to-Military (MM) Dialogue at an early date.

4. Regional Affairs and Cooperation in the International Arena

The Japanese side expressed serious concerns about China’s recent developments in the region such as the Coast Guard Law. Both sides exchanged their views on the situations in the East China Sea and South China Sea. Furthermore, both sides also shared serious concerns about the continued and strengthened unilateral attempts to change the status quo. The four ministers shared the view on the importance of a free and open maritime order based on the rule of law and on respecting international law including the United Nations (UN) Convention on the Law of the Sea.

Japan expressed its strong concerns about the increase of missile capability of North Korea, which obviously violates the UN Security Council resolutions, and insisted to condemn North Korea’s ballistic missile launch on 25th this month. Both sides confirmed the importance of complete implementation of the UN Security Council resolutions towards the complete, verifiable, and irreversible dismantlement of all of North Korea’s weapons of mass destruction and ballistic missiles with all ranges.
Furthermore, the Japanese side expressed its intention to closely coordinate with Indonesia in order to further strengthen relationship with the Southeast Asia, which is the place of strategic importance located on Japan’s critical sea lane. Minister Kishi also stated that Japan will continue to contribute to strengthening resilience of ASEAN through the cooperation of HA/DR including infection-preventive measures and cyber security based on “Vientiane Vision 2.0” and the Indonesian side welcomed this initiative. The both sides agreed that they have deep concerns over the situation in Myanmar and continue to closely cooperate between Japan and Indonesia.

The both sides confirmed to cooperate together towards regional and world peace and stability based on the strategic partnership and concurred to closely collaborate with each other as the driving force for prosperity. 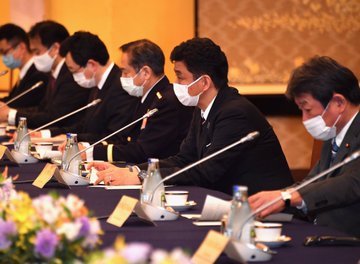